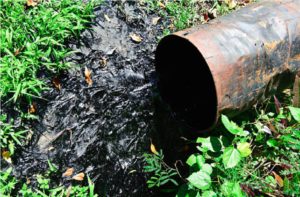 Most people do not realize that their General Liability insurance specifically excludes damages or injuries due to pollution. Pollution is defined as “any solid, liquid, gaseous, or thermal irritant or contaminant, including smoke, vapor, soot, fumes, alkalis, chemicals and waste. Waste includes materials to be recycled, reconditioned, or reclaimed. “ Here are some claim examples where the contractor needed this very important coverage.

A residential contractor unknowingly spreads soil that was contaminated with petroleum across a residential project site during fill operations. The contractor is named in a lawsuit for contamination.
After lengthy deliberations, the contractor spent $250,000 for clean-up and defense costs.

Mechanical Contractor: While a mechanical contractor was repairing a leak on fuel lines at a shipyard, someone at the yard opened the valve that separated the inactive lines from the active lines. Fuel flowed through the lines that were under repair releasing 300 gallons of gasoline. The cost for clean up of the soil and groundwater was over $500,000.

Street & Road Contractors: a Street & Road contractor was subcontracted by General Contractor to pave a parking lot for a new commercial structure. Tack coat was sprayed on the sub-base prior to paving, which had been planned for next morning During the evening, a thunderstorm caused the tack coat to wash off and flow into a nearby stream. The General contractor paid for clean-up costing $200,000 and deducted this amount from the street paver’s bill for their work. The street paver then requested reimbursement from their General Liability insurer, but were denied because of the “absolute pollution” exclusion on the policy.

Utility Contractor: A utility contractor was hired to clear vegetation on a rights of way for power lines. The contractor applied herbicide to reduce vegetation growth. After a rainstorm, the herbicide washed on to the adjoining property of a farm. The farmer’s crops were severely damaged and soil/groundwater was contaminated. The farmer filed a claim for $350,000. in damages.

Utility Contractor: While installing new overhead electrical lines which included sinking of new utility poles, the contractor hit an underground sewer line with an auger. Cleanup of spilled sewage and repair of the sewer line amounted to $190,000.

Most contractors are under the false assumption that Pollution insurance is only needed by waste haulers, environmental contractors and the like. Any contractor can be involved in a pollution claim and clean-up costs alone can bankrupt a company. The cost for Pollution insurance has reduced dramatically over the years. It is now an affordable and much needed insurance protection, and can often be combined with Professional Liability insurance. Call us for advice and a quote! 732-946-9300

It’s Back-to-School Time — Is Your House Ready? How to Ride Your Motorcycle Safely in a Group